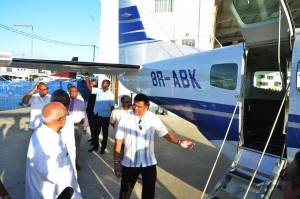 Brian Tiwari escorting then President Ramotar for a tour of the Cessna Grand Caravan in August, 2014. (Guyana Times photo)

In what appears to be an intensified tit-for-tat, former President Donald Ramotar on Friday released a letter from Brian Tiwari to refute the prominent businessman’s claim that he had abandoned the People’s Progressive Party Civic (PPPC) long before  last year’s  general elections and supported the coalition.

However, Tiwari said he had felt compelled to write the letter for fear that Ramotar would have ensured that his domestic airline would have been evicted from a state-owned hangar at the Ogle International Airport.

On Thursday, June 30, 2016, Tiwari stated in a letter to the media : “For those like Former President Ramotar and others who want to convey the impression that BK only jumped ship after the new Government was formed in May 2015, I want to make it abundantly clear that like every patriotic person in Guyana, I took a conscious decision to support the move for change and this decision was made one year before the 2015 elections. There are numerous persons who can support this.”

After Ramotar released Tiwari’s ‘letter of allegiance,’  the businessman said he was forced to write the missive  in attempt to prevent Ramotar from making good on his threat to evict the domestic airline, Jag’s Aviation, from the Guyana Sugar Corporation’s (GuySuco) hangar at the Ogle International Airport. “Everybody knows that, (David ) Granger knows that. We had a meeting with them (coalition) and  I said I was not supporting the PPP but the letter was only to keep us in GuySuco’s hangar,”  Tiwari told Demerara Waves Online News.

Tiwari alleged that Ramotar had threatened to throw out the airline from Ogle after he had seen Raphael Trotman and other then opposition supporters preparing to board a plane from Region One to Georgetown. Tiwari recalled that Ramotar telephoned him, saying that he would not have been paying for that flight and would have stopped flying with Jag’s Aviation. Tiwari said he immediately decided to waive the airfare.

In the letter  to Ramotar dated March 23, 2015- less than two months before the May 11 polls- Tiwari denied supporting the coalition or sharing documents with that grouping. Instead, he reiterated his support for the PPP to regain the majority it lost at the 2011 polls that had resulted in a one-seat minority government.

“Anyone who reports that I am providing support to another political party because they may have seen me some place with others is malicious and wicked. We must be careful at this time, Mr. President, to ensure that mischievous elements do not cause unnecessary divisions. As you have said yourself, this is an extremely important election where the PPP is seeking to restore its lost majority, no one should be allowed to distract us,” said Tiwari.

The two-page letter was copied to former President Bharrat Jagdeo; then Head of the Presidential Secretariat, Dr Roger Luncheon;  then Home Affairs Minister, Clement Rohee and then Minister of Tourism, Housing and Water, Irfaan Ali.

“I will continue to serve in any way I can in the circumstances,” said Tiwari.

The businessman reminded then President Ramotar that he had used his transportation to provide logistical  and other support for PPP campaigns in mainly the interior regions of 1, 7, 8 and 9 and transportation and other support for commemorative activities at Babu John, Port Mourant, Corentyne in honour of late President Cheddi Jagan..  Back in 1999 when there was a crippling public strike, Tiwari said his company had “provided much support without asking for a penny.”

“In our business at BK International we have tried our best to make the PPP government proud  through our performance on public infrastructure contracts,” he said.

Responding to Tiwari’s claims that the Ramotar-led administration had facilitated the sale of three barges and one tug for less than GYD$20 million to his (Ramotar’s) brother who days later had sold one of the barges for GYD$50 million; the sale of another barge by the Public Works Ministry for GYD$3 million although it was worth more than GYD$150 million and the sale of 25 acres of sugarcane lands at West Demerara to his brother and associates, the former President said those claims were largely untrue.

“I am not my brother’s keeper but I spoke to him and he told me that almost one hundred percent of what he (Tiwari) said there are total fabrications or absolute distortions,” Ramotar told Demerara Waves Online News.

The Chairman of the BK Group of Companies was a member of then President Ramotar’s delegation to India in January, 2015.