Parking meters on hold; govt asks for contract after councillors insist on best deal for City 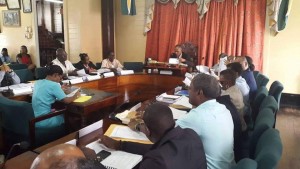 Guyana’s Minister responsible for Local Government, Ronald Bulkan on Sunday said the Georgetown City Council would be asked to halt the parking meter project while central government ensures that there is transparency and that the municipality rather than the investor earns the bulk of revenues

“There is significant moral and financial consideration to request of the council to stay their hand until there is greater transparency surrounding the initiative,” Bulkan told Demerara Waves Online News.

Bulkan said he asked Town Clerk, Royston King for a copy of the contract after four councilors met with him and expressed grave concern about the deal between the municipality and National Parking Systems/Smart City Solutions (NPS/SCS. Although neither King nor Mayor Patricia Chase-Green has given into the one week old request for the contract, the minister was optimistic that he would soon receive it. “I don’t think that is a consideration that the central government would not get it. I don’t think the council would want to adopt such a non-cooperative or even confrontational approach. It is not in their interest so I expect to be provided with it,” said Bulkan.

Mayor Chase- Green, while in Mexico on a parking meter sensitization programme with councilors Oscar Clarke, Junior Garrett and Town Clerk King, has maintained that the revenue earning stream is  good for the cash-strapped municipality.

If given the green light, the Council would earn a mere 20 percent of the takings while the investor would rake in the remainder- a formula that the Minister said the concerned Group of Four has objected to.  “We recognise the need and necessity for traffic management but it can’t be viewed in isolation and the central consideration by the councilors, who have expressed their concerns to me, relates to if maximum revenues will derive from this initiative to the council,” he said.

The councillors, he related, wanted to ensure that there was maximum benefit to the residents, ratepayers in Georgetown and commuters.

The Minister of Communities said he asked for the contract after four councilors expressed reservations to him about the contract and asked that he intervene in the issue.

Deputy Mayor, Sherod Duncan was the first to go public, saying that there was little or no information about the experience and capacity of the companies to provide parking meter services in Georgetown.  Further, he said the agreement was never discussed with the Council.

The Minister hinted that he might ask the council to explain why there was no consultation and what led to the public controversy over the proposal to introduce parking meters. Bulkan made it clear that the Municipality is legally empowered to install parking meters.