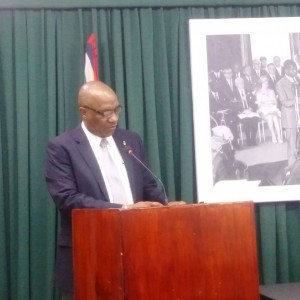 Construction of the long-planned Specialty Hospital has hit a major snag now that India has ruled out financing the project with Fedders Lloyd as the contractor because that company has been barred by the World Bank due to improper practices.
Minister’ of State, Joseph Harmon told a news conference that the decision was communicated in a letter in June , 2016 to the Guyana government by the Indian High Commission in Georgetown. “Among other things, Fedders Lloyd Corporations Limited was not eligible to continue the project because it was debarred or disbarred by the World Bank from projects until 2020 due to its procurement policy,” he said.
India has since asked Guyana to embark on a “fresh tendering process” to allow for the competitive selection of an Indian contracting firm to build the health care facility at Liliendaal, East Coast Demerara for the remaining US$13.8 million.
Harmon said that due to the length of time it takes to advertise for a contractor as well as inflation, interest and fees for the US$13.8 million line of credit from India, Guyana is yet to make a final decision. “While this process is being undertaken, the loan sum continues to be eroded by inflation, interest and fees.”
The Ministers of Finance, Foreign Affairs and Public Health are to seek answers from India before “a definitive course of action” is taken on the future of the planned Specialty Hospital.
‎The Guyana government had almost unilaterally selected Fedders Lloyd, after Surendra Engineering was chased out because of poor performance in constructing the Specialty Hospital.
gnoring concerns by sections of the society such as Transparency Institute of Guyana and the main opposition People’s Progressive Party (PPP). They had called for the project o be re-advertised.
Guyana, under the the last government, had sued Surendra Engineering successfully in the High Court and awarded millions of dollars in damages.