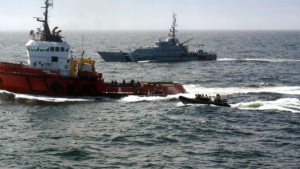 The amount of cocaine found hidden on board a Turkish tug boat was “unprecedented” and had a potential street value of £512 million or US$578 million, a police drugs expert said.

Detective constable Jurgen Wahla, who is based in Aberdeen, was giving evidence at the trial of nine Turkish men accused of smuggling cocaine from Guyana in South America to Europe.

On Monday at the High Court in Glasgow, he was asked by advocate depute Ashley Edwards, prosecuting: “What is the potential maximum street value of the cocaine?”
Mr Wahla replied: “If sold in the UK it would be £512m if sold in gram deals and adulterated to 15 to 20% pure.”

Ms Edwards then said: “Just over half a billion pounds.”

Mr Wahla responded: “That’s correct. It is a massive, massive importation, unprecedented in what I’ve seen in my experience.”

The jury has heard MV Hamal was boarded by the Royal Navy and Border Force officers in international waters in April last year and taken to Aberdeen harbour to be searched.

Mr Wahla said he was present while the cocaine was being taken from a hidden compartment in the ballast tanks at Aberdeen harbour.

He said he tested one of the kilo blocks when it was unloaded. It was found to be 70% pure cocaine.

Mr Wahla was asked how much the cocaine found on the boat weighed in total and replied: “It was 3.2 tons of cocaine.”

Mr Wahla, who is in the serious crime squad and a member of the drugs expert witness and valuation association, told the jury that cocaine is grown exclusively in South America and distributed worldwide.

The jurors were told that he often works with Europol, which is based in Belgium, and the National Crime Agency.

He was asked by Ms Edwards: “What are the recognised trade routes taking the cocaine from where it is grown?”

Mr Wahla replied: “It is now south of Venezuela and Guyana because of a lot of enforcement activity by the USA patrolling the coast.

“Enforcement crackdowns, particularly in Columbia, and increased US enforcement have escalated the value of countries such as Guyana in the global drugs market.”

The crew of the MV Hamal are on trial accused of being involved in an international drug-smuggling operation between February and April 2015.

They are further alleged to have been concerned in the supply of the class A drug between April 21 and 23, 2015.