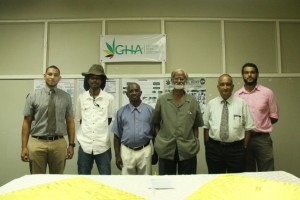 Second from right is Turhane Doerga, Head of the Guyana Hemp Association, with other executive members.

A group of Guyanese has begun lobbying government for approval to produce and export industrial hemp, a plant that belongs to the same family as marijuana, to help create a large number of jobs.

Head of the Guyana Hemp Association, Turhane Doerga says he is confident at least 5,000 jobs will be generated in the first year and earn income five times per acre of rice. “There is no reason not to do hemp and become the major supplier of hemp products to the world,” he told Demerara Waves Online News.

However, he says the objective is not to replace the production of the sweetener and the grain with industrial hemp. “Not at all! We have to add it to the two other excellent products that we have,” he said. “Hemp can only be an addition to what we are doing and you have to make sure that not because of the windfall from hemp that you destroy your other industries.”

Doerga says the GHA has already written to President David Granger, asking for green light to grow industrial hemp on the basis that the 1961 United Nations Single Convention Treaty excludes that plant from the list of narcotics. “There cannot be a better way to get poverty eradicated, get people a job and make this country prosperous and please understand that half an acre of hemp gives a guy a good income so if we don’t do this, this is a crime against Guyana as it was a crime against humanity to have it criminalized in those days,” said Doerga who recalled that the promise by the coalition government is to create jobs.

Seeking to clear up any misconceptions, Doerga said industrial hemp, though a sativa cannot be used as a narcotic because of different chemical properties. “When big business in the West came along, they managed to criminalise it because hemp was a cousin of the marijuana plant but you can smoke what you want or do what you want it doesn’t get you high,” he said.

Doerga said there is a high global demand for industrial hemp which is used by major vehicle manufacturing companies to make seats, dashboards and panels. “The Western world is rediscovering hemp as a manufacturing product for food and bio-diesels,” he said.

Previous: Guyana has concrete proof that Venezuela’s soldiers fired at boat with GGMC officials
Next: ‘Unprecedented’ tug boat cocaine haul from Guyana worth up to £512m, UK Court told