Gaskin, Hughes weigh in on transfer of tourism portfolio 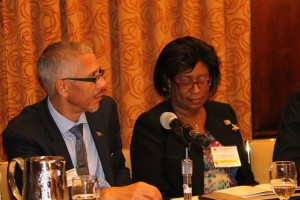 Outgoing Tourism Minister, Cathy Hughes agrees that that sector needs its own separate ministry but she personally believes that there was caution because of concerns about the large number of ministries.

Emphasising that those were her personal views, she said discussions focused more on the number of ministries instead of the key sectors. “There was such a major focus on who had so many ministries and who had fewer ministries and if there were more and, therefore, we eliminated a whole national discourse that we could have had on what the main industries were,” she said.

Hughes said consideration seemed to have lost sight of identifying the priority ministries and dividing the portfolios adequately. “I think if maybe that environment had not been created then there might have been a consideration that  yeah really tourism could stand on its own but I think the environment created the scenario where we came to the table saying that ‘oh gosh nineteen is already too many ministries,'” she said.

She added that she was “absolutely” supportive of the idea of tourism having its own ministry and minister.

As Minister of Business, Dominic Gaskin prepares to take over the tourism portfolio from Hughes next month, he does not believe that the workload will be too heavy.

“If I weren’t able and capable, I don’t think I would have taken on the responsibility so I don’t think the work is too much,” he told Demerara Waves Online News in New York where he was attending a one-day Guyana Investment Conference.

His comments came against the background of calls by the Tourism and Hospitality Association of Guyana (THAG) that the important tourism sector did not have a dedicated minister.

Hughes, who is also in New York,  confirmed that she would no longer be responsible for tourism because of the numerous plans and programmes for the telecommunications sector, a move that has caused THAG to question whether Gaskin would be able to handle both tourism and business.

Gaskin said Hughes’ priorities for Guyana’s tourism sector would become his “because there needs to be some continuity so I guess my immediate priorities would be to ensure that there is continuity and the work that she has done so far is completed.”

Reacting to THAG’s call for the tourism sector to have its own dedicated minister, the Minister of Business said the decision to reassign portfolio was made in President David Granger’s best judgement “THAG doesn’t have the responsibilities or maybe the benefit of all the considerations that the President, as the leader of the country, has to make in deciding how to run the country, the structure of his government..,” he said. Gaskin assured that “the industry would be given the attention that it deserves.”

For her part, Minister Hughes agreed that the tourism sector requires a standalone minister, but at the same time she noted that the “exciting field” of telecommunications is cross-sectoral including tourism and education.  “It’s not the ideal situation, it’s not an easy situation but what I can say is that at this point in time this is what is necessary,” she said.