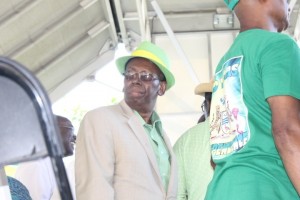 Guyana’s Consul General in New York, Brentnol Evans donned the colours of the APNU+AFC coalition at a victory rally held in June, 2015 in New York.

Guyana’s long-serving Consul General in New York, Brentnol Evans, who was appointed by the People’s Progressive Party (PPP), on Friday said the now one-year old coalition-led administration was “good for Guyana” and and there was no place for tax evaders.

Speaking at the opening of the “Guyana Means Business” Investment Conference in New York, Evans hailed the election of the David Granger-led administration at a time when Guyana is celebrating its 50th Independence Anniversary. “At this fiftieth anniversary celebration- I don’t know if it’s an act of God, I think so- that we have now got a brand new bunch of people running the country and it is definitely for the good of Guyana,” Evans said.

Evans, who worked as a supervisor of Research and Development in the bauxite company and is a close friend of former Prime Minister Samuel Hinds, saluted the four government ministers who participated in the conference. “It is a pleasure for me to be here this morning and it is more wonderful to have in our presence people who are now in charge of bringing the good life to the people of Guyana and I want to this morning gives them a hand,” he said. Present were Minister of Public Security, Khemraj Ramjattan; Minister of Public Infrastructure, David Patterson, and Minister of Business, Dominic Gaskin.

Focussing on President Granger’s concept of a “good life,” he said capitalism required virtuous people who would not evade taxes.  “It’s only fair, I think, that those who engage in business do it the right way but not try to avoid paying the taxes that they are required to pay in Guyana. We need to follow the rules of engagement,” he said.

He described as “sad” recent reports coming out of Guyana stating that several companies have not been following the “rules of engagement.”

2016-06-10
Denis Chabrol
Previous: Gaskin, Hughes weigh in on transfer of tourism portfolio
Next: UG to establish School of Energy and Mines