The grenade located near the front right wheel of Glen Lall’s vehicle.

A grenade was late Saturday night tossed near the vehicle of Kaieteur News publisher, Glenn Lall, outside the newspaper’s office and printery on Saffon Street, Charlestown.

The device did not explode.

Police were summoned and they cordoned off the street, preventing vehicles and pedestrians from passing.

The incident occurred during the first night of the wake for Kaieteur News Assistant Editor, Dale Andrews who passed away earlier Saturday. 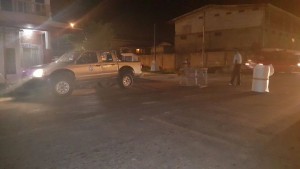 A section of Saffon Street cordoned off by police following the discovery of a grenade next to a vehicle owned by Kaieteur News publisher, Glenn Lall.

Staffers said they heard a thud and moments after they checked, they saw the grenade near the right front wheel of Lall’s vehicle.

In the past, Kaieteur News’ Saffon Street had been burnt and  several staffers, including press operators, were shot dead at the printery several years ago when it was located at Eccles, East Bank Demerara.