Guyanese on Sunday began paying more for gasoline, diesel and kerosene as the price on the world market continued to increase slowly, the state-owned Guyana Oil Company (GuyOil) has announced.

“Consistent with the trend in the world market Guyoil, wishes to announce a movement in prices at its pumps,” said the oil company.  In Georgetown, the retail price for gasoline has moved from GYD$170 per litre  to GYD$180; diesel from GYD$150 to GYD$152 and kerosene from GYD$95 to GYD$105. 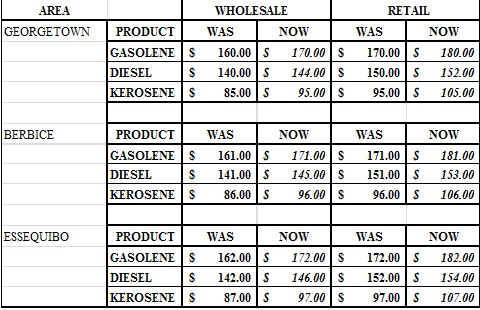 Already, the privately-owned SOL has begun charging more: gasoline is GYD$185 and kerosene is GYD$127. Diesel is being sold at GYD$152, the same as GuyOil.

GuyOil, which is widely regarded as the price-setter for fossil fuels in Guyana,  said it has begun paying more for those products which are being imported from Trinidad and Tobago.

The company said it delayed increasing the prices for gasoline, dieseline and kerosene until June 5, 2016. “The Guyana Oil Company Ltd (Guyoil) has always sought to make petroleum products available to the Guyanese population at prices better than the competition, which has once again been demonstrated in our delayed price review.”

Guyoil  assured that “we remain committed to providing you our valued customers with petroleum products at the best prices, as we forge ahead in contributing positively to the development of our dear land.”

The fuel importer-supplier hinted that the prices for the  major fuels could again increase in keeping with trends on the world market. The World market price for oil has demonstrated positive indications that there is an upward trend in the acquisition cost for fuel, which from all indications may continue its upward path. The Caribbean has not been insulated from this movement which was demonstrated recently by movement in acquisition cost from our suppliers in Trinidad,” GuyOil said.