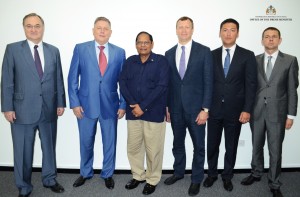 MOSCOW (Sputnik) – The Russian state arms exporter Rosoboronexport has held talks on supplying Russian defense systems to the Co-operative Republic of Guyana with the country’s leadership, the corporation said Friday.

Talks between the Rosoboronexport delegation, headed by deputy chief executive Sergei Goreslavsky, and the political and military leadership of the Co-operative Republic of Guyana were held in Georgetown with the aim of establishing and developing contacts in the area of military and technical cooperation,” the corporation said in a statement.

The Caribbean country has confirmed its interest in cooperation and the sides developed a cooperation roadmap, Rosoboronexport said, adding that it was ready to start implementing projects to modernize and reequip Guyana’s armed forces.

Rosoboronexport views Guyana’s market as a launching pad into the Caribbean defense equipment market, Goreslavsky was quoted as saying in the statement.

Rosoboronexport is responsible for over 85 percent of Russian arms and military technology export, according to the Rostec state technologies corporation.

Prime Minister Moses Nagamootoo’s office only said that he met with Ambassador of the Russian Federation to Guyana Nikolay Smirnov and his delegation to discuss areas of mutual interest.

The delegation, which included Sergey S Goreslavskiy, Gary Bay and Alexey Maslovskiy, highlighted a number of areas of mutual interest that will be further discussed at a follow up meeting, Nagamootoo’s office said.