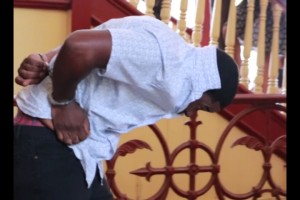 The man, who allegedly snatched jewellery from a former British soldier who is visiting  Guyana for its 50th Independence Anniversary, on Thursday pleaded not guilty to the charge.

He is Jose Barker, 35, of Howes Street, Charlestown, Georgetown who was positively identified by the ex-serviceman, Edward John Constant.  Barker was refused bail and remanded to prison until June 16, 2016 when he is expected to return to court.

Police alleged that the father of six on May 30, 2016 at Croal Street, Georgetown, robbed Constant of one gold chain valued GYD$180,000 and also used personal violence against the robbery victim.

He was represented by Adrian Thompson during his first appearance before Chief Magistrate, Ann Mc Lennan. In requesting bail, the lawyer said his client was not a flight risk and would be willing to lodge his passport.