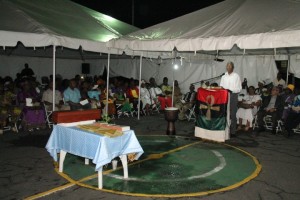 Several books on the impact of slavery on Africans in Guyana will be presented to Attorney General Basil Williams to help him craft a resolution for tabling in the National Assembly to support the Caribbean’s case for compensation by Europe.

Chairman of the Guyana Reparations Committee, Eric Phillips told Demerara Waves Online News that five of the 25 books, which will “correct our history,” will be handed over to Williams next week. “It’s background for him to get the resolution passed in Parliament but is also our legal case against all States whether it is the Guyana State, the British State or the Dutch State- all three are responsible,” he said.

Phillips first made the announcement at the launch of the Guyana Reparations Committee’s leg of the International Youth Reparations Relay and Rally held Friday night at Parade Ground where slaves were beheaded centuries ago. 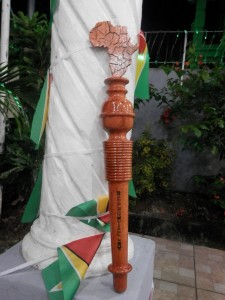 The Reparations Torch being sent across the Caribbean.

He said the books will focus on who were the Africans and when they arrived, what they were doing before slavery, the loss of 450,000 African lives while building Guyana with their bare hands, worked free of cost on plantations for more than 200 years, and the reparations claim.  “They cleared eighteen percent of Guyana and we demand eighteen percent of Guyana,” said Phillips. “We have foreigners in Guyana with more land than Africans; that’s a disgrace,” he said.

Phillips, who is also an executive member of the African Cultural and Development Association (ACDA), assured that the 25 books would be written without any negative motivation to other race groups. “The books are going to be written, without any malice, without any comparisons, without any complaints about who got what; who got, got and they got legitimate reasons for getting but our argument is that the people who died and did all the sacrifice should also get,” he said.

The books are to be published and widely circulated across Guyana

Meanwhile, Guyana’s President David Granger stressed that there is no statute of limitation on genocide all the way up to the International Criminal Court which is governed by the Rome Statute.

The President conceded that the struggle for reparation would be long but he was optimistic that the enslavers would do what is right,” he said.

Caribbean governments two years agreed to push a reparations agenda that will include demanding a full and formal apology from European governments, a development plan for indigenous communities, cultural development, a plan to arrest certain pandemics, eradication of illiteracy, transfer of technology to close the gap between European and Caribbean States, resettlement of descendants of African slaves, a psychological rehabilitation programme, and debt cancellation to overcome poverty and institutional weaknesses.

2016-05-21
Denis Chabrol
Previous: Trotman to GGDMA: “Free for all” mining has ended
Next: UG Bursar’s salary not GYD$1 million