Public Infrastructure Minister David Patterson has revealed that the Government has plans to build   overpasses at strategic locations on the East Bank of Demerara (EBD).

On Friday morning, Patterson told a gathering at Agricola that a significant upgrade to the East Bank thoroughfare will be the creation of three pedestrian overpasses and a fly- over at Diamond

“The pedestrian overhead crossings will be located at the Harbour Bridge intersection at Peter’s Hall; Eccles; and Houston. These sites were chosen following studies which showed that these three areas have the most pedestrian movement,” Patterson stated.

The Minister noted that the expect that the overhead crossing will significantly reduce accidents; save on travel time for those from Diamond; and also precipitate a free flow of traffic at the proposed sites.

He stated that is important to look at ways to diagnose the urban transport situation in Guyana adding that the Government is aware of the problems and trends.

“The Government of Guyana believes that it is high time that we deal with matters of public transport infrastructure, operations, financing, and institutional organization.” 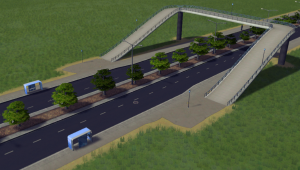 Currently, Patterson noted, the Ministry of Public Infrastructure is in its final stages of the East Bank Demerara Four-Lane Expansion Project.

Two contractors are working on the section of road between Providence and Herstelling and this 2 kilometre of road work is expected to be completed by the end of August 2016. Overall, the project covers 6 kilometres of road from Providence to Diamond and the benefits cannot be understated.

“Not only will the road expansion reduce vehicular operating costs; significantly cut down on travel time; and allow for a smoother flow of traffic, but it is also expected to reduce accidents seen along the East Bank. Safety will also be improved along the East Bank due to the installation of traffic lights, streetlights, and road markings and signs,” he said.

The Sustainable Urban Transportation Study is set to commence in June and will focus on conducting a comprehensive analysis to improve mobility and will cover the entire city of Georgetown, which consists of areas that contain a complex interaction of land uses and activities.

The study will also provide specific recommendations and policy options to allocate road space more efficiently among users and will increase the use of cleaner and more sustainable transportation, such as public transportation and non-motorised modes.