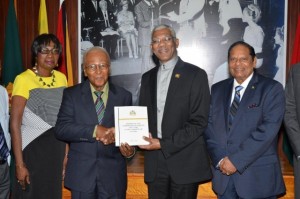 A new system of arbitration answerable to the National Assembly has been recommended by the Public Service Commission of Inquiry to settle pay disputes in the public service.

The Public Service Commission of Inquiry recommends that Guyana’s Labour Act be amended after consultation with the Guyana Public Service Union (GPSU) to allow for the Minister to establish a Wages and  Salaries Commission to review wages and salaries disputes after an impasse at conciliation and to make recommendations to the National Assembly.

“Disputes in wages and salaries resulting in an impasse at negotiations and at conciliation should be referred to a new financial mechanism of a Public Service Wages and Salaries Commission which would be required to make recommendations to the National Assembly within a set time frame,”  states the Commission Report.

Government has already said it favours the reintroduction of a merit increment system and the payment of salaries based on the amount of work done.

The Commission recommends several key ground rules, including affordability, for setting public servants’ wages and salaries through the resumption of collective bargaining. “Wages and salaries and allowances be agreed to by collective bargaining negotiations, ideally for agreements of a mutually agreeable period, taking into account the need to pay competitive, attractive and comparable wages and salaries, having regard to worth of the job, ability to pay, and the impact on the national economy,” states the report.

The report further recommends that the Public Service Appellate Tribunal be appointed with “suitably qualified and experienced persons of high integrity and independence to function in keeping” with the law that governs that body.

Also recommended by the Commission are that public authorities-like the private sector- observe in practice the laws and labour and employment relations in the public service. If the recommendations are accepted, Permanent Secretaries and Heads of Departments will be required to ensure that workplaces and workstations are in keeping with the law. The Department of the Public Service of the Ministry of the Presidency will also be required to inspect all buildings, offices and workstations at least twice a year to “ensure the standards” are “maintained and, if necessary, improved.”