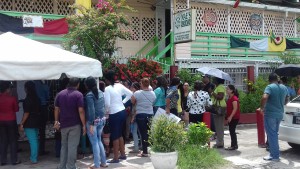 Angry parents on Thursday morning mounted a protest outside of the Mae’s Primary School over a decision taken by the principals of the institution to make some in house changes regarding Grade Six level teachers.

It is understood that the School would have slashed the salaries of the teachers by $20,000 and are making preparations to demote them.

This is after the teachers would have been approached and commenced teaching the children two extra hours of classes outside of the school with a fee attached. This fee was borne by the parents.

This is after the school would have offered a similar package at a costlier price to the parents.

One parent Dwayne Halley explained that the parents decided to protest since the school made plans to switch up the teachers without first informing them.

The parents were then told that it is either they accept the decision or take their children elsewhere to be educated.

“We ask them the other day don’t knock off the teachers they turn and told them that they will teach Grade 5 and they promote the Grade 5 Teachers to teach grade 6…we came here to beg for the teachers. That’s all we want” said Halley.

He was joined by close to 30 other parents who came out to express their concerns over the demotions.  There is talk of the parents possibly moving to the courts over the issue.

An attempt was made to contact the head of the school but Demerara Waves was told that the individual was “otherwise occupied.”