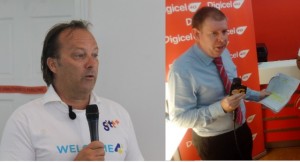 As Guyana prepares for formal liberalization of the telecommunications sector, Digicel is eyeing the provision of landline services, prompting the Guyana Telephone and Telegraph Company (GTT) to call for a level playing field.

Chief Executive Officer of Digicel (Guyana), Kevin Kelly has said that his company’s future investments could include landing a submarine fibre optic cable and the provision of landline services. “With liberalization, we will have cheaper international calling, we’ll have cheaper Internet to the home, we’ll possibly look at landline, we will bring a submarine fibre cable; we’ll basically become a total telecommunication company like you have in Trinidad or Suriname,” he said at the recent launch of his company’s 4G service in Bartica to coincide with that district’s formal declaration has a town.

GTT’s Chief Commercial Officer, Gert Post, however, signaled that his company would oppose any effort by competitors to select certain areas to offer landline services while neglecting others. “For GTT, it’s  very important to have a level playing field… because it cannot be the case that we have to provide landlines, for example, in Essequibo or somewhere in the interior where the competitor can piggyback on the higher growth income (area) here in Georgetown and do the easy stuff first,” he said at the launching of his company’s 4G service in Georgetown.

Post cautioned that if its landline competitor could not abide by the same rules to offer services in low revenue areas, GTT would be pushing to be released from any commitments to serve “revenue unattractive areas.”

GTT is currently Guyana’s only land line service provider, but this is likely to change when the Parliament approves the long-awaited Telecommunications Act.

If Digicel brings another submarine fibre cable, it would be the second such high-speed data conduit here; the first having been laid here several years ago by GTT at a cost of US$30 million.