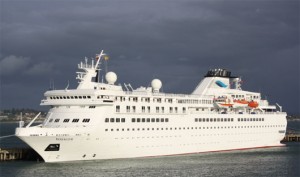 Although a United Kingdom-based cruise company appeared to have shelved a demand for compensation because a cruise ship aborted plans to dock at Port Georgetown, strong recommendations have been made for modern training of pilots and the installation of proper navigational aids.

Demerara Waves Online News was told that the cruise company, All Leisure Holdings Limited, was claiming from the Guyana National Shipping Corporation (GNSC) US$20,524.00 in compensation for revenue lost as a result of the MV Voyager’s cancellation of its visit to Guyana on December 1, 2015.

GNSC’s Managing Director, Andrew Astwood said a report by Guyana’s Maritime Administration (MARAD) was dispatched in April, 2016 to the All Leisure Holdings Limited and since then there has been no word from that UK-based company. “The situation has been sort of resolved to some degree but if it has been resolved to satisfaction, I really couldn’t say,” he said.

Astwood hopes that Guyanese authorities would take the necessary steps to modernize the technical and human resource capacity of the pilots, in the wake of an investigation that found a number of deficiencies that caused the captain of the MV Voyager to abort his trip to Georgetown. “I would obviously like to see a more efficient service. Something like this should not have happened,” he said.

Aboard the cruise ship were 225 crew members and 410 passengers.

Although either suspension or dismissal of Pilot Henry Jupiter was recommended because he had unilaterally departed the Georgetown Boathouse at 5:10 AM on December 1, 2016 instead of 4:30 AM the said day to escort the cruise vessel. He boarded the vessel at 7:20 AM.

MARAD’s Director General, Claudette Rogers has since instructed that either the Harbour Master or the Chief Pilot must pilot all cruise lines calling Port Georgetown.

However, a report by the Advisor/ Coordinator of Maritime Affairs, Captain E.W. Adams says the decision by the Captain of the MV Voyager to cancel its visit had nothing to do with the late arrival of Pilot Jupiter to escort the cruise ship. Against the background of concerns raised by the cruise ship’s captain that the pilot had no electronic aid, was unsure about the correctness of the Chart Datum, he could not have seen the front and rear beacons, unavailability of tugs to assist in berthing, inability of the pilot to read the electronic chart and the absence of navigational aids and missing channel and sea buoys. “The Captain’s legitimate concern and apprehension to proceed into Port Georgetown is, however, understandable in view of the situation with our aids to navigation. The pilot’s lack of modern maritime training, in that he was incapable of using the electronic chart and could not perform “Blind Pilotage” was also of grave concern to the Captain,” Adams said in his report.

Adams further noted that despite Pilot Jupiter’s limitations as a professional mariner he was absolutely sure that he could have piloted the MS Voyager safely into Georgetown when he boarded.

Adams told MARAD’s Director General the time has come for Guyana to have a sustained programme of placing and resuscitating reliable navigational aids along the coast and entrances to its rivers. He further recommended that a hydrographic launch, another high-powered dredge, a buoy tender and pile driving vessel be acquitted.

The Advisor/ Coordinator of Maritime Affairs also recommended that potential pilots go to sea for specific periods of time and attend a recognised nautical institution to acquire the much needed experience and certification before commencing pilot training which initially lasts for six months.

2016-05-03
Denis Chabrol
Previous: Prof. Ivelaw Lloyd Griffith is University of Guyana’s next Vice Chancellor
Next: What crime? Police Force says crime down by 19%