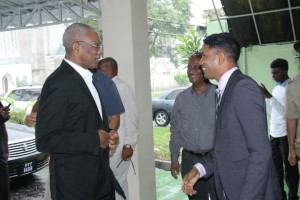 President David Granger has made it clear that his administration is not in the business of politically interfering with the day to day operations of Guyana’s state media entities.

The President made the statement on the heels of accusations of political interference being leveled against the Office of the Prime Minister.

The Guyana Press Association (GPA) had written the President complaining of interference from the Director of Public Information Imran Khan, and Prime Minister Moses Nagamootoo.

“The Guyana Press Association (GPA) wishes to place on record our deep concern regarding interference in the work of the state media…by government ministers, departments and officials of the administration,” the GPA stated in the letter.

Addressing a room filled with media operatives on Friday morning, the President restated that he does not support any sort of political interference in Guyana’s media.

“My administration will not undermine the professionalism of state media workers by subjecting them to political direction or interference with their work,” the President affirmed.

He did so while underscoring the importance of the state media pointing out that most of Guyana’s media entities are located on the coast and lack the capacity to cover Guyana in its entirety.

“The state will continue to have a presence in the media,” he said noting that “this is necessary because private media is located on the coastland…they are not located in rural and hinterland areas – they are located in Georgetown.”

The President said that state media has a duty to provide information with all the citizens of this country – covering all three arms of government.

“State media will continue to provide this service in a dispassionate and a professional manner,” said President Granger.

In his comments however, the President also noted the importance of private media entities which essentially serve as “watchdogs” for the Government of the day.

“Independent media act as watchdogs for the government, they promote transparency… there is not good reason for the state to interfere in the work of the private media,” the President declared.