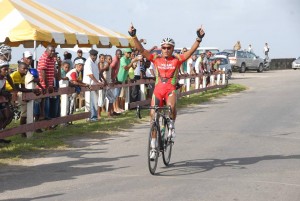 Guyana national cyclist Alanzo Greaves has been slapped with a one year ban from cycling ban by the World Anti-Doping Agency (WADA), after he failed an anti-dope test.

According to a release from the Caribbean Regional Anti-Doping Organization (RADO), on November 27, 2015, Greaves was informed of the Adverse Analytical Finding of Testosterone in his urine sample, via a “Notice of Charge and Provisional Suspension” issued by RADO.

He responded to the RADO Notice, by letter of December 7, 2015. His case then underwent “Results Management” by the RADO Disciplinary Panel.

The Disciplinary Panel noted that Greaves admitted the charge, but stated that the infraction was not intentional.

This is his first violation and he waived his right to have the “B” sample analyse.

It was therefore decided that Greaves shall be disqualified in respect of the Tour of Guyana Five-Stage Cycle Race and any prize money and ranking points obtained therein shall be forfeited.

2016-04-29
Writer
Previous: No political interference for state media – Granger
Next: All radio, TV licences to be re-evaluated – Broadcasting Authority