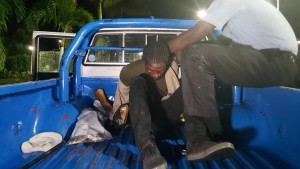 The bandit nabbed by the police (Travis Chase photo)

Police officials have confirmed that just after 3:30 on Friday morning , the four men stormed the building brandishing weapons and demanding cash.

It has been confirmed that while monies were taken away during the robbery, the amount is yet to be disclosed. “The men then ordered everyone to lie on the ground and took the security guard to the cashier cage where they held up the cashier and took away an undisclosed sum of foreign and local currency,” police said.

Four persons working with the casino were shot during the ordeal – two of them in their hands. It has been confirmed that one of the injured employees is the Casino’s Director of Security. Police named the injured employees as Eon Garraway, James Gregory, Orlando Knights and Udairan Sookraj who receiving injuries to their left hand, left foot, left hand and right hand, respectively. They have been admitted to hospital.

Investigators said three patrons- Melissa Ferguson, Jermaine Mason and Roshel Fraser were also assaulted by the men during the incident.

After police were called in, they encountered the men at the scene and there was an exchange of gunfire which led to Police Lance Corporal Andrew Richardson of Impact Base, Brickdam being shot in his abdomen.

Police have confirmed that as the bandits attempted to escape one of the suspects was found in a maintenance room of the hotel. “One of the suspects has been arrested and the firearm that was taken away from the security guard was recovered. His three accomplices managed to escape,” police said in a statement.

He was found with a shotgun and has been arrested. Police have also confirmed that the vehicle used by the bandits was hijacked on Sunday.

The area has been cordoned off and police are still at the scene conducting investigations.

The Guyana Police Force said that the four men armed with firearms entered the casino of the Princess Hotel, Providence, discharged rounds into the air and held up the security guard on duty and took away his shotgun and ammunition.