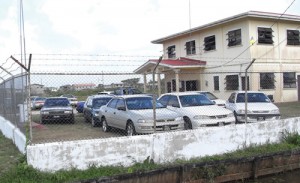 Police say that prisoners being held at the Golden Grove, East Bank Demerara Police Station managed to set fire to the station lockups after being denied cigarettes.

According to a statement from the police at about 06:30 hrs on Thursday prisoners in the lockups were taken out of their cells by the police to shower themselves.

At the conclusion of the shower, three of them demanded cigarettes and refused to return to their cells after their request was denied.

Angry that the request was denied, the  three prisoners began throwing faeces at the police ranks during efforts to get them back into the cells and remained in the passage-way behind the main door leading to the cells, which was locked.

According to the police later in the day, smoke was seen coming from the lockups and the three prisoners were seen with lit newspapers which they placed in the passage-way at the main door.

The blaze which scorched two wooden doors and damaged a CCTV camera was extinguished and the three prisoners were subsequently replaced in their cells in the lockups.

Investigations are being conducted into the incident.

In early March 17 prisoners died after a fire was lit in the Camp Street Prison. That incident is still being investigated.

Previous: Hundreds of vendors from Stabroek environs to be relocated ‘temporarily’
Next: Social Cohesion “catching on” – Minister Ally