Hundreds of vendors from Stabroek environs to be relocated ‘temporarily’ 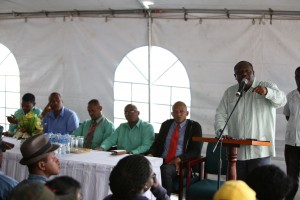 Hundreds of persons plying their trade in the environs of Stabroek Market were on Thursday summoned to a meeting at the Georgetown City Council where they were informed of a definite plan to relocate them “temporarily.’

The vendors sat under a tent in the compound as Town Clerk Royston King made the announcement.

King declared that the move was part of an overarching plan to restore Georgetown and more specifically, the Stabroek Market.

The plan is to move the hundreds of vendors to a lot which formerly housed fast food franchise Royal Castle at Hadfield and Lombard Streets. King said that the initial move would be for a temporary period of four months.

“As you know that area is very iconic, it is very rich in history and we need to create a new set of energies that will allow the beauty of that particular to emanate,” King said referring to the Stabroek Square.

The Town Clerk said that the area will be outfitted with security on a 24 hour basis and will also have the amenities that are needed.

Asked whether space would be a concern given the amount of persons being move, King responded in the negative. 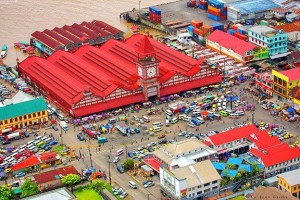 “That land is adequate to take off all the people that we are looking at; particularly those people that are on the immediate periphery of that square,” said King.

A commitment has been made to provide additional space for persons that are not able to acquire spots.

He said that from his observation, the vendors have no objection to the move, however this support was no unanimous.

Mario Joseph, one of the vendors affected by the move was particularly concerned about the possible loss of revenue and space availability. 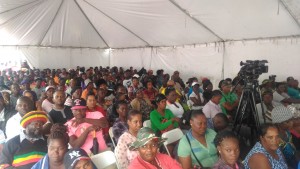 The vendors at the meeting

“That’s one of the most central hubs for hundreds of people and if you are going to relocate them another location – they definitely won’t experience the same level of commerce…It is going to be a difficult business move for everybody who has to relocate,” Joseph told Demerara Waves.

Another vendor said that the move was plainly “unfair” and “disrespectful to vendors.”

“You just sit down, you make a decision – you never consult with us and then you come and tell us that you have to move – move into an area that cannot accommodate the quantum of vendors,” said Conway Douglas.