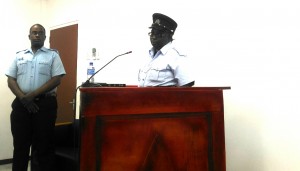 Several system defects at the Camp Street Prison give rise to the possibility for prisoners to escape their dorms and ultimately the prison compound.

The officer stationed in the Operations Room told the COI that several integral flays in the system could give rise to the possibility of a prison escape.

While the officer detailed the flays at the COI, for security purposes, that information is not being released to the public.

Benjamin told the commission that the flaws have been present for “three  to four months” with others for a longer period.

Asked what would be needed to ensure that there was no prison breakout, the first thing mentioned by the officer was more staffing. 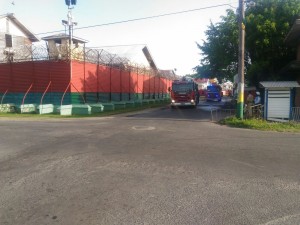 Fire tenders outside the Georgetown Prison

It has been explained that the prison at some times, has a ratio of 500 inmates to only two prison officers.

Also on her list of things to improve security at the prison were more monitors for cameras and more telephones in the Operations room.

Esther Charles, another Operations Room Officer also testified at the COI. She recalled noticing being the first person to notice the fire on March 2 and went to immediately inform her superiors.’

She said that it was not possible that a prison officer could have started the blaze given that it was started inside of the dorm as opposed to outside if it were to be started by an officer.

Previous: Parents of murdered British teenager, Dominic Bernard, to fly out to Guyana to bring body home
Next: Woman charged with exciting hostility to Pres Granger