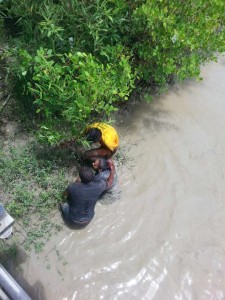 The woman being taken from the river (Travis Chase photo)

A woman was on Tuesday recused from the clutches of death in the Demerara River after she plunged in an apparent suicide attempt.

Information reaching Demerara Waves indicates that the woman plunged from the Demerara Harbour Bridge shortly before noon on Tuesday.

Death would not be her fate as two men who were traversing the bridge on motorcycles went after her and brought her to safety.

Officials at the Bridge have confirmed that the woman has been taken to the Georgetown Public Hospital by a relative.