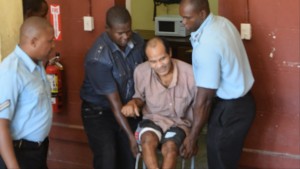 A North West District farmer was Friday charged with the stabbing death of a policeman more than one month ago at Matthews Ridge while efforts were being made to arrest him.

Dennis Marks, 38, of Wauna Creek was not required to plea to the indictable charge that he murdered policeman, Leonard La Rose while acting in the execution of his duty.

Chief Magistrate, Ann Mc Lennan remanded him to prison until May 3, 2016 when he is scheduled to appear in the Matthew’s Ridge Court.

He was not represented by a lawyer.

Marks was lifted in and out of the courtroom and remained seated due to a gunshot injury he sustained while resisting arrest as he was wanted for alleged rape.

Two other policemen were allegedly stabbed by Marks and treated at the Matthews Ridge Hospital and sent away.