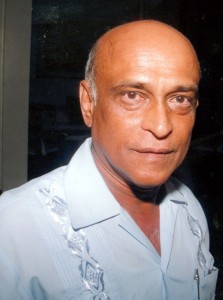 In court papers seen by Demerara Waves Online News, Nawbatt is suing for damages in excess of  GYD$25 million for breach of contract of employment and special damages for GYD$24,295,104.

The former High Commission said he  June 8,  2015, Ms. Audrey Waddell, Director General (ag), Ministry of Foreign Affairs, wrongfully and in repudiatory breach of the said agreement purported to terminate the Plaintiff’s employment and wrongfully dismissed him.

“I have been directed to inform you that your appointment as High Commissioner of Guyana to Canada will end on August 31, 2015 at which time you will be reposted to Guyana. Accordingly you are hereby asked to finalize all the necessary arrangements relating to the conclusion of your post and departure. Please note that all benefits accruable at post will end on August 31, 2015,” Waddell told Nawbatt in the letter.

Nawbatt says in the court papers that he was contracted on February 10, 2015  to February 9, 2016 by the Guyana Government  as High Commissioner to Canada at a monthly salary of GYD$$773,801, a monthly station allowance of US$4,500. The contract also stipulates that he is entitled to a 22½% of the basic salary payable in six-monthly periods or on termination of his Contract of Employment.  The former envoy says the Guyana government had agreed to pay costs of primary, secondary or tertiary education of his children.

He was also entitled to free use of a chauffeur-driven car, business class air fares between Guyana and the city of his post for himself, spouse and children under 25 years old n posting transfer between posts and termination of his services.

He states that he was also entitled to approved excess baggage charges and cash  for unutilized tickets.

Nawbatt further states that the Guyana government agreed to pay for the hotel and travelling expenses incurred by him, his spouse and children under twenty-five (25) years of age prior to the provision of free furnished accommodation. When he  has to remain in a hotel for a period in excess of two (2) months, he shall be required to meet one-third of the cost of meals taken by himself and family.

He says that the Guyana government had agreed to pay the cost of him shipping the personal effects – including one 20-foot container of items, two private motor vehicles-from to and from Guyana or the place of his residence to the city of post and/or such other place of convenience on the termination of this Contract of Employment or between posts in the event he is transferred from one post to another. In addition, Nawbatt says he was entitled to a waiver of all duties/taxes eligible in Guyana on his personal effects and/or the said motor vehicles

He says he was entitled to 42 days vacation leave or payment of salary, station allowance or other relevant allowances in lieu thereof.

The former Guyana High Commissioner to Canada says the Guyana government had agreed to reimburse him 66⅔ of the premiums payable in regard to a plan/or plans of insurance provided on an individual or group basis, for medical, dental, hospitalization and post-hospitalization benefits himself, his spouse and dependents provided the insurance is maintained and/or is operative in the country where he is stationed.  If no medical insurance programme is available, public funds shall be used to defray two-thirds (⅔) of the cost of medical attention provided for him and his family.

Alternatively, the Guyana government will pay if necessary, the contributions payable by the employer to National Insurance providing medical and other related benefits when such insurance is available on the territory in which he is stationed. 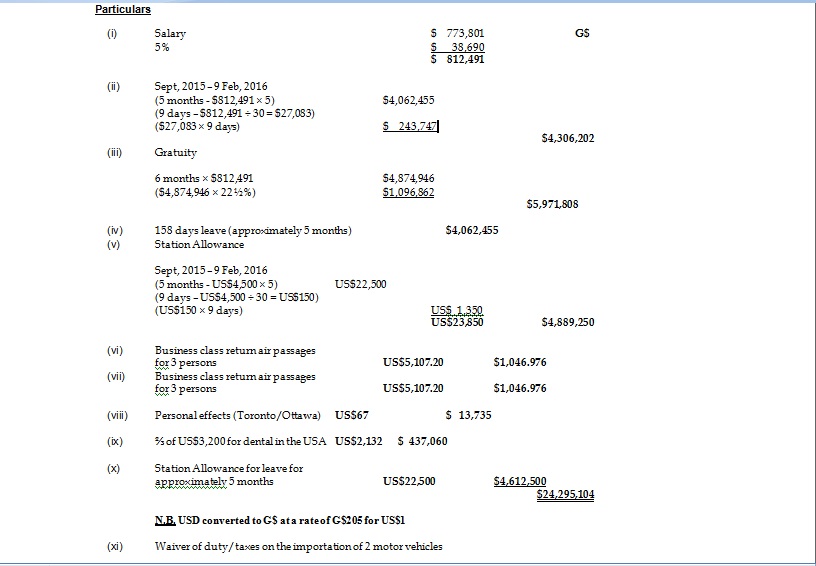