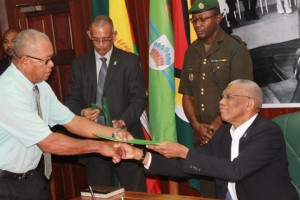 Rupert Henry Smith talking the Oath of office as Mayor of Mabauma before President David Granger on Wednesday, April 7, 2016.

The High Court on Wednesday quashed the appointment of a mayor the new town of Mabaruma and ordered the holding of fresh elections in those local authority areas.

The case has been adjourned until April 20, 2016, giving the defendants an opportunity to file court documents to show cause why the orders should not be made absolute.

The interim ruling by Justice Diana Insanally was as a result of the People’s Progressive Party Civic’s (PPPC) Zulfikar Mustapha challenging the decision by Minister of Communities, Ronald Bulkan to appoint a mayor after there was a 6-6 tie in the number of seats won at last month’s local government elections.

The PPPC councilors walked out of the first council meeting after failing to convince A Partnership for National Unity (APNU) that the mayorship should be rotated.

Now, Justice Insanally has directed Bulkan, quashing his decision on ro about April 5, 201, selecting Rupert Henry Smith as Mayor of Mabaruma because it violates the Municipal and District Councils Act because it is “is in excess of and without jurisdiction, made in bad faith, is unreasonable, arbitrary, capricious, based upon irrelevant and improper considerations, mala fide, malicious, vindictive, unlawful, ultra vires, null, void and of no legal effect.”

The order blocks Smith and Astrille Gamell from performing the functions of Mayor and Deputy Mayor.

The High Court Judge has called on Smith and Gamell to show cause why the temporary order should not be made absolute to quash their selection and the selection of any or all committees.

The Court further order the acting Town Clerk of Mabaruma to fix a date for fresh elections by eligible voters in Mabaruma.

Council meetings had been held on April 2 and April 5 for the purpose of appointing a Mayor and Deputy Mayor but with no agreement reached.

The PPPC’s Mustapha said in court documents that after the Town Clerk asked for a 15 minute adjournment to  permit him to contact Minister of Communities, Bulkan, he resumed the meeting and informed that Bulkan had selected Smith as Mayor of the town located in north-western Guyana.

Mustapha said the six councillors of the PPP/C did not attend the meeting when it resumed. He added that Smith then assumed the role of Chairman of the meeting and proceeded to hold an election for the post of Deputy Mayor; Astrille Gamell was then elected Deputy Mayor of the Municipality of Mabaruma. The six APNU+AFC Councillors, he said, then proceeded to nominate and elect members of the Finance Committee.

“As a result, it is clear that Ronald Bulkan, Minister of Communities, the Town Clerk (ag) and the 6 Councilors of the APNU+AFC flouted, ignored and contravened the provisions of the Municipal and District Councils Act, Cap. 28:01 and that “the Minister and the Town Clerk simply ignored this statutory mandate, thwarted the will of the electorate and usurped the constitutional mandate of the Guyana Elections Commission by the Ministers selection of a candidate for Mayor without resort to the electorate,” Mustapha said in court papers.

The High Court Judge also quashed the appointments of chairmen and vice chairmen for the Woodlands-Bel Air, Malgre Tout-Meer Zorgen, Gibraltar-Fyrish, Industry-Plaisance and Woodlands-Farm  Neighbourhood Democractic Councils where there was a tie.

Previous: “We are not enemies” – Granger promises equal resources for Towns
Next: Outstanding money already paid for shares in GTT