“We are not enemies” – Granger promises equal resources for Towns 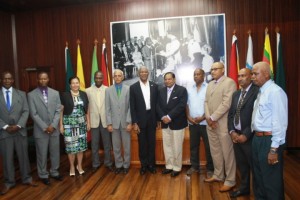 With the swearing in of the Mayors and Deputy Mayors of the nine towns in Guyana, President David Granger has affirmed that there will be no show of favouritism on the part of central government because a particular political party may have won the municipality.

Granger made the comment on the heels of growing concern about whether the scales would be tipped in favour of towns that are controlled by APNU+AFC.

The President stated that all three levels of government, local, regional, and central, must work together to ensure the development of Guyana as a country.

“When I swear you in I don’t see PPP, I don’t see APNU+AFC I don’t see independents I see people who have taken this challenge to serve,” the President declared.

He urged the Local Government officials to chart a path forward that would see the development of their regions and communities.

“We believe that these huge regions could only be developed if they are driven by the engines of strong town,” he said later adding “there’s work to do, banks to be built lights to be provided, roads to be fixed.”

“The municipal central and regional government levels; we have to work together to develop our country we are not enemies,” Granger added.

Meanwhile, Rabindranauth Mohan, Mayor of Anna Regina stated that he has some amount of trust in the statement made by the President.

“I am taking the President’s words for granted that he will treat all towns equally and most of the townships are stranded for cash because the current revenue base for the townships. Particularly most of them outside of Georgetown, have low money and as a result of that it affects the work of the council greatly,” said the new Mayor.

He stressed that there are many things the council would want to see done but these of course need revenue.

Corriverton Mayor, Ganesh Gangadin said that he is pleased with the formal commitment given by the President.

“We are working with that commitment…he has formally committed to us that resources will be equally distributed,” said Gangadin.

He said the help of central government would be pivotal to the undertaking of several transformational projects.

“We have some very long term and very ambition plans which will definitely require help from central government,” the Mayor stated.

The opposition People’s Progressive Party Civic (PPPC) won control of Anna Regina, Rose Hall and Corriverton, while A Partnership for National Unity+ Alliance For Change (APNU+AFC) coalition was victorious in Georgetown, New Amsterdam, Linden, Bartica and Lethem. There was a tie in Mabaruma and when the PPPC Councillors walked out, APNU+AFC’s nominee for mayor was voted into office for that town.

Local Government Elections were held last month for the first time since 1994.