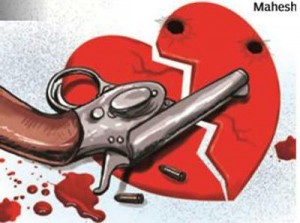 A jilted man on Sunday shot and injured his ex-lover moments after she arrived home in the company of another man, police said.

The Guyana Police Force said crime sleuths were still on the manhunt for the assailant.

Investigators said they were shot at about 1:45 AM Sunday, April 3, 2016 at Half Mile Wismark and have been admitted to hospital.

“Investigations so far have revealed that Simone Belle had just arrived home in a vehicle driven by Sherwin Hughes, when shots were discharged at them in the vehicle by a man who is reported to have shared a relationship with Belle and which was ended several months ago,” the Guyana Police Force said in a statement.