Oscar Clarke says he would have resigned if accused of child molestation; all up to Winston Harding 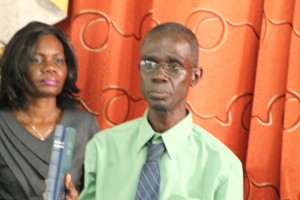 Winston Harding, holding the Holy Bible and taking the Oath of Office as a councillor for the City of Georgetown.

Even as embattled A Partnership for National Unity’s (APNU) City Councillor, Winston Harding declined to say whether he would give up his seat over child molestation allegations,  General Secretary of the People’s National Congress Reform (PNCR), Oscar Clarke said he would have resigned if those accusations had been leveled against him.

Clarke, a two-time City Councillor, said now that Harding is facing criticisms from certain quarters that he had allegedly sexually molested a minor, it is up to him to decide his future. “It is up to Mr. Harding and I think Mr. Harding has to give this a lot of thought. Is he going to be able to get the support of the people out there that he is serving? How are they going to look at him?,” Clarke said.

The PNCR General Secretary added that had he been faced with such charges, he would not have accepted the offer to be a candidate. “People have to decide these things for themselves. It is not something I could decide for you,” he said. 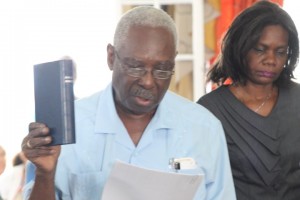 Oscar Clarke, holding the Holy Bible, as he took the Oath of Office as a councillor for the City of Georgetown.

Clarke said he only knew of the allegations swirling around Harding two weeks before the elections when someone told him that a poster had been a pole labeling Harding a child molester. Clarke said he subsequently spoke with Harding and fellow PNCR politician, Volda Lawrence.

Asked whether A Partnership for National Unity (APNU) of which the PNCR is the largest party was still dissociating itself from Harding, Clarke said nothing could be done to prevent the councilor from participating in the municipal body.  On the question of whether Harding could be asked to resign, Clarke said “you could ask him but he doesn’t have to.”

“I personally would not ask him. I tell you, I leave it to people’s conscience. He doesn’t do anything to me and he wouldn’t prevent me from doing what I have to do in this council,” he said.

Told that in the Guyanese political environment, the APNU’s opponents might want to make capital out of Harding’s continued presence on the Georgetown City  Council, the PNCR General Secretary queried “What about Bharrat Jagdeo and his wife? That is not real politics?”

Jagdeo’s then wife, Varshnie, had accused him of mistreating her by, among other things, leaving her to sleep in a mosquito-infested area of State House.