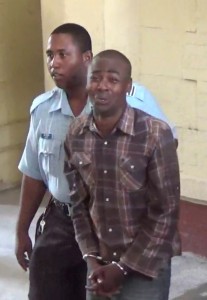 Samuel George being escorted by a policeman at the Georgetown Magistrates’ Court.

A 27-year old man has been accused of raping and robbing a grandmother while she was on duty at a Municipal Day Care Centre at East Ruimveldt, Georgetown,

Police Prosecutor, Deniro Jones objected to bail, saying that the defendant had a pending rape charge against him and that he had given police a different address.

Claiming that he was wrongfully accused of the offences, he refused to walk into the courtroom and so was lifted inside by policemen even as he appealed to President David Granger for assistance.  “Granger, Granger, help me”.

The woman was allegedly beaten robbed and raped twice within 35 minutes at about 1 AM on March 28, 2016.