Guyanese to pay less for electricity

The Guyana Power and Light Inc.  on Thursday announced a 20% reduction in net rates for the supply of electricity across all Tariff categories effective April 1, 2016 as a result in the fall of world oil prices during the past several months.

“The Company took into account the reduction in world market prices for fuel over the past year, which has favorably impacted its overall costs and wishes to pass on the benefits of these reductions to its Customers,” the power company said in a statement.

The decision was taken after an “intensive review” by GPL’s Board of Directors in consultation with its Executive Management team.

The electricity supplier said it wanted to reduce the tariffs even further, but is constrained by its current level of overheads and more so by the technical and commercial losses, which in 2015 amounted to 29.2% of dispatched power. “These losses include losses in transmission and distribution due to aged infrastructure, as well as theft of electricity, meter tampering and other non technical losses.”

The Company says it is actively engaged in addressing these losses and has approved a capital programme of G$9.5B. “This programme is intended to replace old generating assets, construct and upgrade substations, expand and upgrade the transmission and distribution network, expand smart metering, amongst others.”

The power company used the opportunity to appeal to consumers to report electricity theft. “The Company’s significant losses due to electricity theft, tampering of meters, meter by-passes and other forms of dishonesty result in higher operating costs and GPL is requesting the help of the public in reporting and addressing these matters. ”

GPL is engaged in a Power Utility Upgrade Program financed by the Inter American Development Bank (IADB) with grant funding from the European Union (EU) to the tune of US$64M. This Program is intended to strengthen management, improve operational efficiencies and reduce losses.

The Company says it acknowledged that there is some level of public dissatisfaction with its services and is committed to actively addressing all issues relating to this, including  faster response times to customer queries, more efficient delivery of services,  ensuring  the integrity of its officers  both internal and contracted, delivery of timely billing and information,  amongst others.

“GPL also recognises that our customers are the ultimate stakeholders and therefore is requesting the public’s patience and understanding. 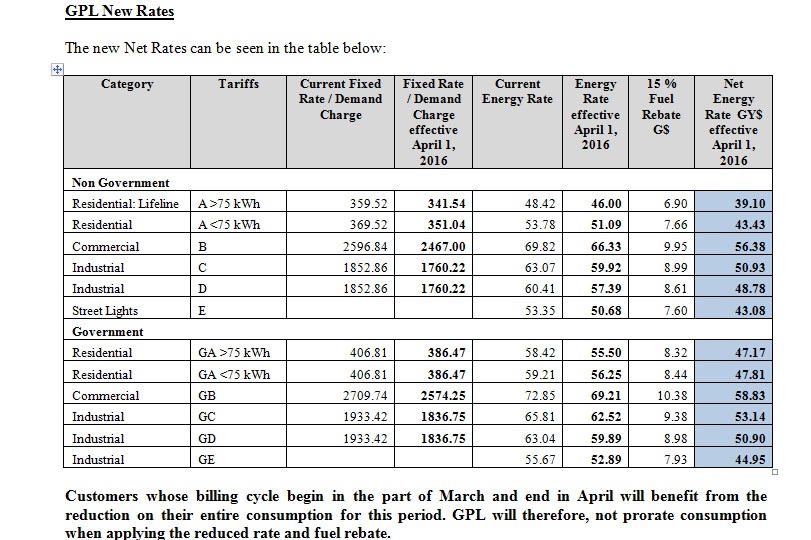