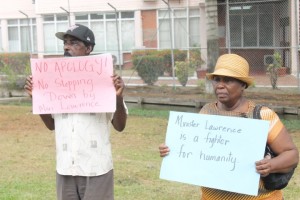 Amid increasing calls for President David Granger to sack Social Services Minister, Volda Lawrence for the selection of an accused sex offender as a candidate in the recently held Local Government Elections (LGE), a loosely-knot group on Tuesday picketed outside Granger’s office in support of the minister.

Sister Penda Guyan, a spokeswoman for the persons who picketed on Vlissengen Road outside the Ministry of the Presidency, told Demerara Waves Online News that they plan to seek a meeting with President Granger and deliver a statement to him in solidarity with Lawrence.

Guyan accused the children and women’s rights organisation, Red Thread, of seeking cheap publicity in its call for Lawrence to resign or be fired from her ministerial post.  “We feel that there have been accusations and very  malicious attacks on the Minister and we feel that they are unfounded and it’s a non-issue and because of that we, the people, believe that she acted correctly, we find that she did nothing wrong,” Guyan said.

Known mostly for her association with the African Cultural and Development Association (ACDA), Guyan said the evidence clearly shows that the APNU candidate, Winston Harding, has been acquitted of sex offence charges. 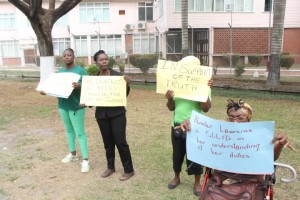 The group believes that if Red Thread has lingering concerns that Harding is an alleged sex offender, it should lodge a complaint with Social Protection Minister Lawrence. However, when asked whether it would not be a conflict of interest to report the matter to Lawrence who is a party in the matter, Guyan said that was no grounds for concern. “It doesn’t matter! Minister Lawrence is the Minister of Social Protection of the country so it has to be filed to her department. It doesn’t have to be that she  specifically deals with it but her department,” she said.

Guyan also brushed aside concerns that Lawrence should be criticized because of perceptions that he is a child molester in much the same way as Guyana is ranked very low on Transparency International’s Corruption Perception Index. “You cannot expect a minister to step down because of someone’s perception. What you have to do is under her watch file a complaint and you (Red Thread) and you did not that. If you file a complaint, she will deal with it,” she said.

Granger’s A Partnership for National Unity (APNU) has already dissociated itself from Harding who scored the highest number of votes in his constituency.

The Guyana Elections Commission (GECOM) has said that a candidate could not be withdrawn after the elections, but could be replaced after resignation or death.