Man of Guyanese background arrested on fear of terrorism in Canada 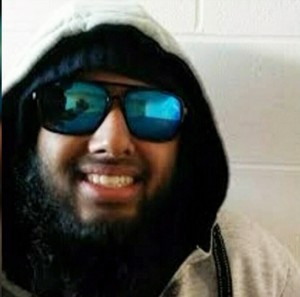 The RCMP integrated national security enforcement team has arrested 23-year-old Kevin Omar Mohamed fearing he was about to commit terrorism.

BRAMPTON—The day after he was arrested by RCMP anti-terrorism police, a 23-year-old appeared in court Saturday to face weapons charges and allegations he was preparing to leave Canada to engage in terrorism.

“He was arrested in Waterloo,” said RCMP Superintendent Lise Crouch, the Assistant Criminal Operations Officer in Ontario. “It’s a file that we’ve been working on for some time.”

Mohamed has been charged with possession of a dangerous weapon and carrying a concealed weapon — apparently a knife. Testifying in Brampton, Sgt. Adam MacIntosh told a provincial court judge the investigation was also probing five anti-terrorism offenses.
While the former University of Waterloo engineering student has not yet been charged with terrorism, Sgt. MacIntosh said police have reasonable grounds to believe Mohamed would leave Canada to participate in terrorism, advocate or promote terrorism and facilitate terrorist activity.

The RCMP is seeking a peace bond that would impose conditions on Mohamed’s conduct. Under Canada’s anti-terrorism law, police can ask the courts for peace bonds against those they suspect may be about to commit terrorism offences.

Conditions can include staying off the Internet and surrendering passports. Peace bond cases must be approved by the Attorney General, who provided signed consent in this case. Mohammed was scheduled to return to court on Tuesday.

“This arrest speaks to our ability to tackle a threat that is multifaceted and constantly evolving,” Superintendent Crouch said in a statement issued by the RCMP on Saturday afternoon.

“While there was no indication of any plans for a domestic attack, we must remain committed to preventing individuals from traveling abroad to gain training and expertise that could be used in the planning and implementation of future attacks on Canadian soil.”

The RCMP statement said Durham Police Services and Ontario Provincial Police played “a significant role in this case,” which it said was “in no way linked to the terrorist attacks that occurred in Brussels.”

Defence lawyer Anser Farooq questioned why Mohamed was arrested on suspicion of terrorism but charged only with relatively minor weapons offences. “He’s okay, a little confused,” he said of his client.

Prof. Amarnath Amarasingam, who has been studying Canadian foreign fighters, said Mohamed was “Guyanese by background” and that friends had described him as socially awkward. On social media, where he was known as Abu Jayyid, he wavered between supporting ISIL and opposing it, he said.

CTV News reported that University of Waterloo terrorism expert Lorne Dawson says he has been monitoring Mohamed’s social media activities since early 2014. Dawson says Mohamed has shared a mix of “strong” and “strange” views since then, but recently, he showed a “dramatic shift” in his attitude. “He went from being pro-ISIS to being anti-ISIS,” Dawson told CTV News Channel on Saturday. Dawson says Mohamed recently started expressing “a lot of sympathy” for al Qaeda and affiliated groups, including Jabhat Al-Nusra, also known as the Al Nusra Front. Mohamed’s actions included quoting pro-jihadi, anti-ISIS theologians on Twitter, Dawson said.

Dawson pointed out that Bill C-51 has made it easier for law enforcement to arrest individuals suspected of planning to travel abroad to participate in terrorism. Where law enforcement used to have to show the suspect was “likely” to leave for those reasons, now they only need to demonstrate that he “may” do it, Dawson said.

He suggested the move to apprehend Mohamed probably has to do with the fear he might travel to Syria. “The action now is undoubtedly a result of what’s happened in Brussels and Paris,” he said. “(It’s a result of) heightened awareness that we want to stop anyone from leaving because you never know what kind of training they’re going to receive, and if they may return.”

Dawson says Mohamed goes by the online name AbuJayyid1, and is not considered a “big player” or “necessarily influential” in any terrorist movement.

The University of Waterloo has confirmed that a student by the same name was enrolled in its engineering program in the spring of 2015, but did not graduate.

A Facebook page belonging to a Kevin Mohamed also says he last studied at UW’s engineering program. The Facebook page includes a handful of anti-ISIS posts from 2014, including the message: “Misguided groups like ISIS don’t represent me,” posted in October 2014. Another post from Dec. 9, 2014 says: “I can’t understand how some Muslims legitimize attacking innocent non-combatants. Where did they learn that is fine?”
On Thursday, @AbuJayyid1 posted a screenshot on Twitter of a first-person shooter video game. The video shows several people being shot at an airport security terminal, and includes the caption: “Where can I get the Brussels airport MOD on Call of Duty?”

Responding to the Brussels bombings last week, Public Safety Minister Ralph Goodale called Canada “fundamentally a safe and peaceful nation,” adding that, “At this moment we have no reason to change Canada’s threat level.”

But violent extremism is a growing problem in Canada. About 180 people “with a nexus to Canada” are active in overseas terrorism — including 100 in Syria and Iraq alone, according to the director of the Canadian Security Intelligence Service.

Another 60 have returned to Canada after engaging in terrorist activity, while 90 to 100 have not left Canada but want to, Michel Coulombe testified during a March 7 appearance before the Senate Committee on National Security and Defence.