Leader of the Opposition Bharrat Jagdeo is not too keen on supporting a call for Social Protection Minister Volda Lawrence to be dismissed but says that the Government official should show some contrition and apologize.

Calls have been mounted for Lawrence to be dismissed from her post after she commented on an allegation of child molestation saying that it was a “family issue.”

The case involved Winston Harding, an APNU+AFC candidate in the recently held Local Government Polls. Posters were posted in Harding’s constituency labeling him a child molester.

When the allegations were brought to the attention of the Minister she stated “this is a family issue that has been going on and on and on and on for whatever reason, I can’t tell you, because if I had a brother, even if there was an accusation, this is not how I would go about helping him.”

Red Thread in response called for her to be removed from the Ministry and has promised to continue protesting until such is done. 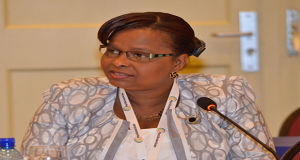 Questioned on the issue on Thursday, Jagdeo told reporters that the Minister should apologize and launch a probe into the issue.

“Whether she should resign or not I think this is matter for the President,” said Jagdeo as he advocated for the Minister to be allowed an opportunity to express “contrition.”

Despite this, he was stern that political parties should distance themselves from allegations of child sexual assault to send a strong message to offenders.

“If she knew of the facts and she made that comment I think then she has abdicated her responsibility to the child. She chose a political person in front of the child,” said Jagdeo.

The Minister has been silent on the issue since the calls for her to be booted. (Jomo Brusheildon Paul)