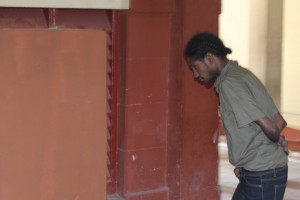 Three men were Tuesday arraigned for the murder of a Guyanese agriculturist who returned home from Montserrat where he had worked for several years.

Chief Magistrate, Ann Mc Lennan said they were not required to plea to the indictable charge of murdering 60-year old Anthony Breedy at his home at Hill Foot, Soesdyke-Linden Highway between March 12 and March 14, 2016 in the course and in the furtherance of a robbery.

The trio was remanded to prison until April 18, 2016 when they will return to court for a report.

The Prosecution said the post mortem examination report and further statements were outstanding. Breedy’s body was found with his head bashed in and his hands and feet tied in the lower flat of his home. He returned to Guyana permanently last year from Montserrat where he had worked for more than 15 years

Donald “Short man” Trapp and Kemo “Trini” Corbin exiting the prisoners’ chute at the Georgetown Magistrates’ Court to avoid their faces being photographed.

The shackled and handcuffed men exited the prisoners’ chute by their backs to avoid being photographed by the media.

Police have said they found Breedy’s Automatic Teller Machine (ATM) card in possession of Goriah shortly after he had hid Breedy’s stolen vehicle at Nabaclis. He has already told investigators that he had planned to take the vehicle to Berbice to sell it.

Two other suspects were subsequently arrested at a house at Itahaca, West Coast Berbice.