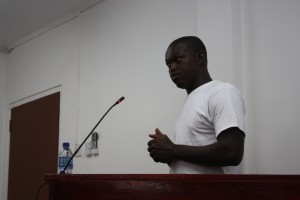 It was shockingly revealed today that one of the 17 men that died in the Camp Street Prison riot in the Capital A Dormitory on March 3, was found with his head separated from his torso.

This was revealed during the cross examination of inmate Steve Richard Bacchus by Joint Services Counsel Selwyn Pieters on Tuesday.

The inmate had told the Commission earlier that he was one of the inmates who kicked out a wall separating the prison dorms to mount a rescue for those trapped in the blaze.

He recalled removing several of the badly burnt bodies from Capital A before handing them over to officials. Bacchus said that he recovered bodies from the washroom area and from the toilet where prisoners had died during the fire.

He was asked by Pieters whether one of the bodies he found after the blaze was headless, the inmate responded in the affirmative.

However, he was not able to say whether the inmate had his head severed during, after or before the blaze. Pieters suggested that the man may have died even before the blaze but Bacchus hesitantly denied.

Neither of the two men provided an identification of the inmate that was found headless, however Bacchus stated that the “skull” was found on a bed.

The inmate testified that he did not see any other inmates with chop marks or any other marks of violence. In fact, the inmate told the Commission that the two persons that were in the bathroom had a minimal amount of burnt marks. (Jomo Brusheildon Paul)