Was there a plot to burn down the Camp Street Prison? 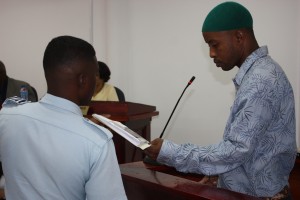 No marijuana, no weapons, no phones, says Lewis

As officials at the Commission of Inquiry (CoI) into the Camp Street Prison riot cross examining witnesses on Wednesday, the question of whether there was a plot by the prisoners to burn down the prison.

The question was posed by attorney at law Dexter Todd and was put to inmate Michael Lewis who was appearing before the Commission for a second day.

Point blank, the murder accused was asked “do you know of any inmates with any plot to burn the prison down?”

Without much hesitation, Lewis plainly responded “no sir.”

Again Todd questioned whether Lewis was aware of any plot to start a fire and the inmate responded “no sir” in the same demeanor.

After complaining about the lack of meat in the food being served to prisoners on his first day of testimony, Lewis on Wednesday stated that he was also dissatisfied with the pace in which Guyana’s judiciary works.’

Under cross examination by Police and Prison Attorney Selwyn Pieters, the inmate of two years stated that he never saw any marijuana, cellular phones or improvised weapons in the prison dorm.

This came as a surprise to many since other inmates have testified that these items were rampant in the prison. In fact, on prisoner stated that the contraband provided some amount of comfort to persons in the Camp Street Jail.

“Only time I saw cell phone is when the senior officer came to search the location, them would come with cell phone on them…When the prisoners (officers) carried out a search they never showed no prisoner what they found,” said Lewis.

Asked about sharpened tooth brushes he said “I never saw that sir” adding “I never see no such drugs sir” when questioned about the presence of marijuana.

He also testified that prison officials were aware of a hole in the wale between downs A & B in the Capital Division. Lewis said that the hole was used primarily for communication purposes. (Jomo Brusheildon Paul)