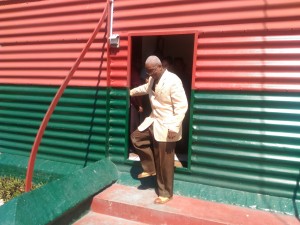 The Commission of Inquiry (CoI) into the Camp Street prison riot again toured the prison facility, this time to give the new additions to the team a sense of the layout of the facility where the fatal fire occurred.

Persons from the local media fraternity were also a part of the site visit.

In the Capital A division, the scene was one of mass destruction with piles of debris strewn all over the facility.

Capital A was characterized by the stench of burnt mattresses and half burned items which included bottles, bowls, sheets and clothing.

The rancid scent of burned flesh was also present in the air as the team made its way through the piles of rubble on the floor.

Capital B was also visibly affected by the riot with blood stains on the concrete floor. The blood stains stretched from the entrance to the facility right to a gaping hole in the wall separating the two divisions.

There  was also some romance novels, newspaper clippings, baby oil and cream among other items that remained in the prison dormitory.

Michael Lewis who testified before the Commission earlier on Tuesday was also present and provided some insight into what happened at the time of the fire.

Prison officials were questioned about the infrastructure of the facility since prisoner claimed that the water to the building was turned off.

Works Officer Kirk Joseph explained that water is usually pumped to an overhead tank and only a prison officer could gain access to turn off the water main to the facility.

Officer in Charge Kevin Pilgrim stated that video surveillance which is expected to be submitted to the Commission of Inquiry will show exactly who, if anyone, turned off the water to the facility. (Jomo Brusheildon Paul)