PPP worried birth certificates will be used to rig elections

Addressing hundreds of persons at Babu John, Port Mourant,  Corentyne on Sunday, March 6, 2016 in honour of late People’s Progressive Party founder-leader, Dr. Cheddi Jagan,  the Opposition Leader reasoned that the voters list could appear clean but the party needed to guard against padding with under-aged persons.

“Even if we have a clean registration and the fraudulent birth certificates -they give out 10,000 birth certificates through that ministry to underage people then those people will be registered and it’s stacked against us too,” he said.

Jagdeo suggested that the separation of births and deaths registration from the Ministry of Public Security
(previously the Ministry of Home Affairs) and putting it in the hands of the Minister of Citizenship and Immigration, Winston Felix was possibly part of a plan to register thousands of persons to meet voting age. 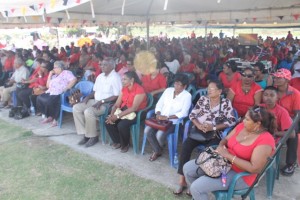 The major section of attendees at the PPP-organised event to commemorate the life and work the party’s late founder leader and President of Guyana, Dr. Cheddi Jagan at Babu John, Port Mourant.

Noting that the PPP’s request for public vetting of polling day staff ahead of last year’s general elections to weed out “hardcore APNU supporters,” was scuttled by the three pro-APNU commissioners and GECOM Chairman Dr. Steve Surujbally, he called for a transparent system of recruiting Presiding Officers and other officials.

The PPP also believes that it stands a greater chance of regaining central government power if there is electronic voting to prevent the stuffing of ballot boxes with left over ballots at the end of polling day. “We have to fight tooth and nail to get electronic voting in the system so that when you go there, there are no extra ballots in the afternoon to give out in numbers,” he said.

Other measures, he said,  the PPP would be clamouring for include making electoral fraud by ordinary citizens and GECOM officials before an elections an offence.

Jagdeo also called for GECOM to launch an international investigation about the fraudulent statements of poll that he said were designed to thwart the will of the people last yeat.

He also reiterated concerns that  the Returning Officers in Regions Four and Eight did not allow the PPPC’s requests for a recount.

Previous: Local govt councillors must treat PPP supporters properly after LGE- Jagdeo
Next: Equating State Violence with the Resistance it engenders is wrong