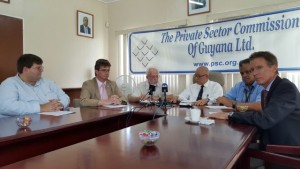 Western diplomats, preparing to observe the upcoming Local Government Elections (LGE), have given the Guyana Elections Commission (GECOM) high marks for preparations for the polls, but the country’s leading business organisation believes that more voter education could have been done.

“We are confident that the preparations that would have been made by the Guyana Elections Commission are adequate to ensuring a free and fair contest and we look forward to seeing our observers see a high turnout on election day,” Charge D’Affaires at the American Embassy here,  Brian Hunt here told a news conference jointly held by top American, British and Canadian diplomats and the Private Sector Commission (PSC).

However, PSC Chairman, Retired Major General Norman Mc Lean believed that the electorate could have been educated even more about the hybrid electoral system of first past the post and proportional representation to be used for the first time. Mc Lean said the umbrella business organisation spoke with GECOM officials Friday about the importance of ensuring voters are aware of the polling stations, the procedure for voting and “and the answer is as far as possible yes they have done so.”

The PSC boss could not say how many of his organisation’s representatives would be observing the LGE, the first to be held since 1994. In this regard, he said the PSC members in Corentyne to observe the voting and counting process.

Canada, which has been spearheading a series of local government projects across the Caribbean including Guyana, hopes that Guyanese will participate in the elections as part of the process to improve their communities. “We expect the local elections after 22 years will make a huge difference with issues that are most important in the daily lives of Guyanese it is now in the Guyanese hands to make their voices heard,”  Head of Aid at the Canadian High Commission, Daniel Joly said.

Asked whether the ABC observers would make pronouncements about the conduct of the elections before GECOM does so, Britain’s High Commissioner to Guyana, Greg Quinn reiterated that nothing wrong was done in that regard at the May 11, 2015 general elections and the ABC diplomats had no problem doing so again. “In my opinion to be perfectly honest is that what we did at the time was completely appropriate. Looking back at that would I do anything different today- NO,” he said.

Quinn recalled that the American, British and Canadian observers had scored last year’s general elections as free and fair ahead of GECOM based on a wide variety of assessments. “We pronounced on the basis the views of not only what we have seen, but a variety of international organisations had seen and I know what the protocol said. Our view has not changed and no evidence has been given to change that view in my intervening period,” he said.

The holding of LGE is in keeping with a general election campaign promise by the coalition of A Partnership for National Unity+ Alliance For Change (APNU+AFC).

The opposition People’s Progressive Party Civic (PPPC) regards LGE as a semi-opinion poll on the performance of the 10-month old coalition-led government.