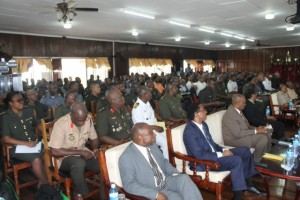 President David Granger has charged the reserve arm of the Guyana Defence Force (GDF) which includes the People’s Militia to be the army of the people as Guyana dawns of a new age threats to territorial integrity and internal security.

Granger made the charge at the annual GDF Officers Conference on Thursday declared that his administration has no intentions of increase the current maximum capacity of the GDF but rather will look to the People’s Militia to provide the necessary support.

Eighteen years after it was disestablished by the People’s Progressive Party Civic (PPPC)-led administration, the Guyana People’s Militia (GPM) was re-activated in 2015 with hopes of recruiting an additional 1,500 persons as reserves.

“The strength of the Guyana Defence Force is not going to be increased above the current capacity levels the force however will be built up not only by a strong regular force but it will be augmented by a reserve force which as you know has already reverted to its original name,” the Commander in Chief Stated.

He explained that the GDF and militia must always be in a state of operation readiness and ready for deployment in the face if any threat against Guyana and the Caribbean.

“Guyana’s borders are too extensive, its landscape is too expansive and the cost of maintaining large regular units, too expensive if we are to preserve our territorial and coastal security” Granger, a former Chief of Staff stated.

Going forward, he said, that there will be a greater presence of the People’s Militia in Guyana’s administrative regions, especially at the borders.

“The reserve force will support and supplement the regular force. Reservists must be deployed in every region to ensure that Guyana’s defence is total and comprehensive…reservists will be the forces eyes and ears. Reservists will constitute a sort of army of the people,” Granger declared.

Tagged with: President David Granger addressing the opening of the 2016 Annual Officers' Conference.