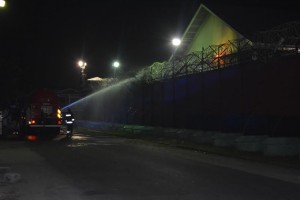 At minutes after 20:00hrs on Wednesday, firefighters were call to the Georgetown ‘Camp Street’ Prisons to put out a small fire that was started by inmates at one of the cells of the prison, however what seemed like a quick operation to a few turned into a few hours.

As three fire trucks attempted to out the fire, the pressure from the truck just wasn’t enough and the water could not reach the flames.

After a few more tries and with a growing crowd, the firemen were able to quell the blaze, but not for long.

As officials lingered at the scene, the shouts from prisoners became obscene and once again, the inmates lit another mattress at the exact same spot.

This time, the prisoners shouted to reporters that their “self-support” food had been taken away. Prisoners on self-support are usually provided with meals by family members.

After another 15 minutes of the mattress burning, the fire fighters were again able o out the blaze but this seemed to anger the prisoners even further and again the fire was lit – this time after a 30 minute interval.

Persons at the scene questioned how the prisoners were able to acquire matches to start the blaze in the first place.

Reports indicate that officials would have carried out a random contraband check at the prison earlier in the day; however prison officials have not been able to confirm this information.

This is not the first time that inmates have been able to start a fire in the compound that takes up an entire city block in Georgetown.

Each time, officials have been able to contain the blaze. (Jomo Brusheildon Paul)