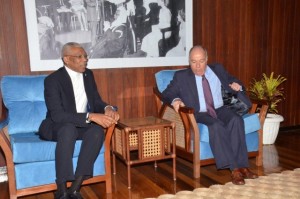 “The proposals in toto are workable. I am satisfied in toto that they are workable. Any specific element may have a problem but when you take them altogether in all the circumstances they are quite workable. It requires that they be worked,” he told Demerara Waves Online News.

The Guyana Foreign Minister said the UN Chief has been mandated by the 50-year old Geneva Agreement to take the controversy to the International Court of Justice now that all other options have not borne fruit. “He needs to choose the ICJ or find a very good reason as to why he would not want t get there but eventually he would have to get there unless Venezuela does the decent thing which is to abandon its contention that the (1899 Arbitral Tribunal) Award is null and void,” he said.

Greenidge said he also briefed his Brazilian counterpart, Mauro Vieria, about the latest developments on the controversy during the latter’s one-day visit to Georgetown on Wednesday. “We gave them an update. They don’t need to be told anything else because they know everything. We just gave them an update with regards to the UN process,” Greenidge said.

Greenidge declined to disclose details about the proposals but suggested that they were tied to finding a solution to the controversy over the 1899 Arbitral Tribunal Award that Guyana maintains represents a full, final and perfect settlement of the border with Brazil.

The Guyanese Foreign Minister expressed confidence that Brazil’s support for Guyana on the border controversy remained intact, citing the fact that the three South American countries share the tri-junction border demarcation on Mount Roraima. “Brazil has a position that has been consistent over the decades namely that the resolution of border issues should be done peacefully, that they should be consistent with international law, and what is more is that Brazil is a party to both Guyana and Venezuea with respect of the tri-junction point…If we hadn’t agreed on those, there would be no point,” he said.

Greenidge said Brazil’s position is the same as Guyana and the bulk of the international community as regards legality and the rule of law.

Asked whether Brazil continued to support Guyana in dealing with the border controversy, Vieria said that was a bilateral matter between Georgetown and Caracas. “This is a bilateral issue that has to be solved by the two countries within the framework that’s been treated and that’s the  Brazilian position,” he said.

Brazil has for decades maintained that the change in Guyana- Venezuela borders would have implications for its territory and so has always diplomatically supported Guyana.

On the other hand, Venezuela continues to register its objections to the exploitation and exploration of natural resources onshore and offshore Essequibo, as part of its stance that the Essequibo Region is hers.

The border spat boiled over last year May days after American oil-giant, ExxonMobil, announced the discovery of a significant oil deposit offshore Essequibo.

Previous: “I am not afraid of releasing it” – Pres Granger to release Rodney COI report
Next: Nothing wrong with judges making decisions during pre-retirement leave- Chief Justice