Board of Inquiry to investigate Dataram’s claims against CANU 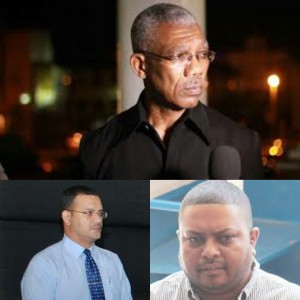 President David Granger has announced that a decision has been taken to establish a Board of Inquiry to investigate claims of corruption made by self-professed drug baron Barry Dataram against Guyana’s security agencies.

The President said that the decision was made on Tuesday by the National Security Committee, which is headed by him.

Dataram had made scathing allegations against senior officials at the Customs and Anti-Narcotics Unit (CANU) over the past few days.

He accused CANU of being involved in the cocaine trade with one unnamed agent raking in as much as GYD$10 million to allow cocaine to leave the country.

“CANU, them is the most corrupted, rogue security force in this country. They are the biggest drug dealer this country has. The same drug that they seize, half of it goes back on the street,” he said on HGPTV Channel 67’s Nightly News.

While, CANU has since denied the allegations, the President is still moving ahead with the inquiry.

President Granger when questioned by the allegations said that the “Board of Inquiry will be convened under an officer to be named…That inquiry will determine veracity of information published in newspapers.”

He said that the Officer will be named and the Terms of Reference will be set and given to the investigators at a later date.

Asked what would become of the situation if anyone were to be found culpable, Granger stated that the law prescribes the course of action and such would be followed.

“We will deal with the culpable in a way that we always deal with the culpable. We expect due process….we expect that the person after proper investigation is put before the courts….we are not prosecuting anybody but we just want to know the facts,” said President Granger. (Jomo Brusheildon Paul)