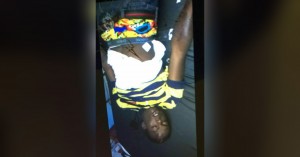 Carl Haynes, an official attached to a private security company says that he was saved by the snapping of a bandit’s gun during an attempted robbery on Sheriff Street on Monday.

It is understood that Haynes was walking along Second Street, Campbellville, Georgetown, accompanied by his sister Rayon Haynes when they were held up by a man armed with a firearm.

Haynes told Demerara Waves that when the man approached them, he immediately resisted but the bandit grabbed his sister and then aimed the firearm at him.

“By time he say that now I give he a duck and I run and same time I reach for my gun…When he see that now he grabble me sister and like trying for shoot me,” said Haynes.

With the gun pointed at him, Haynes feared for the worst as he reached for his own firearm.

However, the bandit’s gun did not go off and it would be Haynes who fired a shot.

He explained that the alleged bandit’s weapon somehow malfunctioned and started “snapping.”

Seeing this, Haynes fired a bullet that lodged itself in the man’s head.

That man has been identified by police as Isaiah Marks of ‘C’ Field, Sophia, and was pronounced dead on arrival at the GPHC.

Asked whether he knew the assailant, Haynes responded in the negative.

As police investigations continue, Haynes is required to report to a police station every week for the next few months.