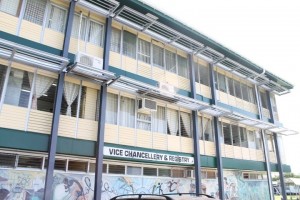 The University of Guyana (UG) Sunday dismissed reports that a female student was raped at the Turkeyen Campus, but instead said she was intoxicated.

“On Friday afternoon, February 26, 2016, a female student was taken to the medical centre on the Turkeyen campus and was subsequently diagnosed as being intoxicated by the university’s capable medical personnel.

Investigations by the University of Guyana Administration have not revealed any basis to conclude or suspect that she was sexually assaulted as alleged,” the publicly-funded tertiary institution said in a statement.

UG did not say whether the woman was intoxicated by alcohol or a drug, the circumstances of her intoxication and whether persons were questioned about the incident.

In apparent response to concerns by an unnamed UG staffer, who resides at the Turkeyen Campus, the institution said steps were being taken to improve security there. “The University places a high priority on the safety and security of its members and visitors to the campus. The University is pursuing several measures to enhance security on campus, and will continue to exercise maximum care and due diligence in providing a safe and secure environment for students and staff on our campuses.”

The state-owned Guyana Chronicle newspaper reported on Saturday, February 27 that the student was drugged and gang-raped by a group of male students, based on claims by a staff-member who was heard by one of that newspaper’s reporters speaking with security guards about the need to check areas of the campus periodically.

The newspaper reported that after gang-raping the girl,  the young men escorted her to the campus medic where she was treated for injuries she sustained from the assault.

The UG staff member has threatened to report the alleged incident to police if authorities do not conduct a probe to ensure that the woman receives justice.

Tagged with: University of Guyana