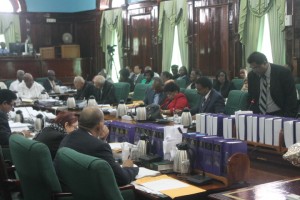 Former Home Affairs Minister Clement Rohee stated that already there is a situation whereby guns are being smuggled into Guyana and this will intensify if the plans are implemented.

Rohee indicated that with the increase in dealership fees, dealers will undoubtedly take steps to increase the prices that firearms and ammunition are being sold at.

“We heard that illegal firearms are entering this country….that firearms are pouring into our country across the border. It seems to be that the attention should be focused on addressing that situation,” said Rohee.

Public Security Minister Khemraj Ramjattan who presented the Bill to the House stated that the government is slated to gather more revenue with the increases. These revenues, he explained, will be vital in the processing of licenses in the future.

“To capture back some of the revenues…there should be an increase in these firearm licenses and of course the dealership,” he said.

It was revealed that presently there are 4500 licenses for pistols, 3000 shotgun licenses and 3047 rifle licenses being held by the Guyanese public.

Meanwhile, PPP MP Dharamkumar Seeraj pointed out that the APNU+AFC made no promises to increase taxes on the campaign trail.

“APNU+AFC spoke of no new taxes and no increases in taxes but here we see a situation where not only there is a proposal on increases for firearms…The timing of it is so out of place in terms that the industry is going through a tough time….instead of considering some amount of release the burden is being added,” he said.

He described the increases as “draconian” pointing out that “$5000 can spell the difference between eating today and going to bed hungry.