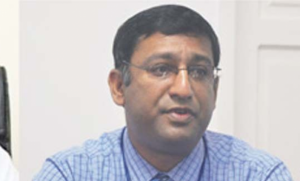 Police Officials have confirmed that wanted former Guyana Power and Light (GPL) Deputy Chief Executive Officer Aeshwar Deonarine is in Canada and plans are in place to seek his extradition to Guyana.

Deonarine is wanted by the police in connection with the fraudulent obtaining of some 27.8M of GPL’s money by himself and former GPL Board Secretary Carvil Duncan.

Duncan has already been hauled before the courts and has pleaded not guilty to the charge.

For several months, police have been tracking Deonarine as he was allowed to leave the country after promising to pay the government the monies.

However, Deonarine never came through on that promise.

Crime Chief Wendell Blanhum told reporters on Thursday that his extradition from Canada was being sought.

He explained that the police force has already “informed our overseas law enforcement counter parts” and they are in constant contact on the matter.

“I have already expressed an interest in apprehending and returning him to Guyana so he can face those charges which were instituted against him by the police,” said Blanhum.