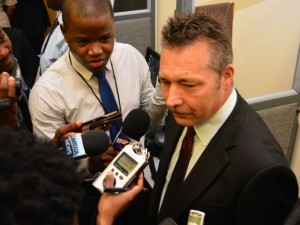 Financial Investigation Expert Sam Sittlington has decried the manner in which Guyana’s political leadership is addressing matters concerning the Special and Organised Crime Unit (SOCU), while calling for more to be done in terms of investment for the Unit.

Sittlington, who recently completed a five week advisory partnership with SOCU, highlighted the concern at a British High Commission press conference on Wednesday.

Concerns about SOCU have risen in the past weeks with the Opposition alleging that the organization was being politically directed and used to carry out attacks.

“From all the evidence being unearthed, it is clear that all the apprehensions and concerns we expressed are being borne out,” former Attorney General Anil Nandlall recently stated while adding that SOCU is being “used as a weapon.”

However, Sittlington at the press conference stated that he is delighted with what he is seeing in SOCU.

“There are difficulties and there have been difficulties but I think there is focus now on what can be achieved and direction in how they can achieve what SOCU was set up to do,” he stated.

Sittlington was pellucid that legitimate business has nothing to fear noting that politically motivated statements may have some demoralizing effect.

“Recently in the press we have all seen SOCU being kicked about like a political football. The comments made can be demoralising for the staff and certainly for Assistant Commissioner James. But you know what, they get on with their job, in a professional manner,” said the Irish financial crimes expert and former police investigator who now heads his own entity called The Fraud Company.

On his recommendations, he said that there needs to be a clear indication of which Ministry the unit would fall under and where the resources would be coming from.

“A number of Ministries have a say in the functioning of SOCU and this creates confusion and instability. To have clear Ministerial direction and funding from one source and a budget that caters for the operational needs of SOCU is a priority,” he stated adding “If I was to describe the current process of obtaining equipment to assist SOCU operations I would use the terms beg, steal or borrow, and I wouldn’t be far wrong.”

The Expert also signaled the need for the agency to have more resources since the currently available resources are woefully inadequate.

He said that while SOCU is currently conducting 285 investigations with less than ten persons working at the agency.

“SOCU currently manage a total of 285 investigations, 59 of those are live investigations of which immediate action is required and the remaining held until further intelligence becomes available. Prioritising is essential.  They also service the needs of other agencies, being reactive to ongoing operations conducted by these agencies. They are also expecting further large NICIL type investigations to reach their doors in the coming weeks. This workload cannot be sustained within the current staff,” he said.